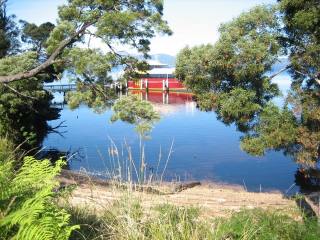 Strahan Wharf Centre
An ideal starting point for any visit to Strahan and Macquarie Harbour. The reception desk is built from Huon pine. The foyer is made from river gravel. It also has an excellent and comprehensive display recounting the story of the Tasmanian west coast. Contact (03) 6471 7488.

Strahan Central
This building is now a cafe and gallery with accommodation but for people who visited the town a few years ago it will be remembered as The Royal Ba-k of Avram, a project of the self-titled Duke of Avram who, concerned that the average citizen could not open his own bank decided to open a gift shop selling coins and, in order to avoid getting into trouble, called it a Ba-k. He did not win. Eventually he was closed down by the police.

The Strahan Post Office and Customs Office
This handsome building on the Esplanade is a fine example of an early 20th century Customs House. It was built to meet the demands of Strahan as it became the major port for the mining operations at Queenstown. It is a two-storey brick building with stucco trim. It now houses the National Parks and Wildlife offices.

Ormiston
Located on Bay Street which runs off The Esplanade. Follow The Esplanade to the west at Strahan and it is quite impossible to miss. The house was built by F.O. Henry, a successful local storekeeper who made his fortune investing in mining in the area, in 1902 and is one of the finest examples of Federation architecture in the country. The grounds around the building are large and impressive, as are the beautiful magnolia trees. It was once owned by the so-called Duke of Avram who achieved some notoriety in the area by opening 'The Royal Ba-k of Avram'. It is apparently true that, in Australia, you can't call yourself a bank unless you are actually behaving like a bank. 'Duke of Avram', who promoted the enterprise as 'Australia's most unique coinage and currency' and sold tourists coins, notes and souvenir bank books, was forced to call what was essentially a gift and novelty shop a 'Ba-k'. He was eventually closed down by the police. Ormiston was bought by two Queenslanders who turned it into a 5-star luxury guest house.

Peoples Park and Hogarth Falls
At the northernmost end of Strahan Harbour is the People Park, a pleasant mixture of natural forest and botanical gardens with picnic and camping facilities. From here it is possible to take a 30 minute walk (one way) to the Hogarth Falls. The path passes through rainforest and the trees have been clearly identified for those interested in the botany of the area.

Water Tower Hill Lookout
Travelling up Esk Street past the cafe the visitor arrives at Water Tower Hill which offers an excellent view over Macquarie Harbour and shows how small Strahan really is. It would be beautiful on a sunny day - which is rather rare on this harsh coast.

Ocean Beach
No visit to Strahan is complete without travelling across to the ocean beach. If you want to experience what the end of the world is really like it is worthwhile standing on this hard, flat beach watching the huge waves relentlessly breaking and realising that those waves, travelling on the Roaring Forties, have not made contact with land between Australia and Patagonia. At this point you are further south than the Cape of Good Hope and on the same latitude as the southern reaches of Patagonia. Ocean Beach is 40 km long and the dunes behind the beach, given the prevailing winds, are huge. On a fine day the sunsets over the beach are particularly beautiful.

Macquarie Harbour
On a clear day Macquarie Harbour is like a near-perfect mirror. Its waters are stained by the brown button grass which grows on the river banks and its shores are heavily wooded. It is always worth remembering that, when the convicts lived and worked here, it was common for them to row from Sarah Island to the Gordon River, to spend the day cutting down huon pines, and then to row back. The harbour may look beautiful but it has seen great hardship and suffering.

There are a number of cruises which leave Strahan and travel across Macquarie Harbour and up the lower reaches of the Gordon River. Some will take visitors to Hells Gate, others go to Sarah Island and others simply pass those attractions and let passengers explore the rainforest on the edge of the Gordon River. The James Kelly travels most days of the year. Contact (03) 6471 7187.

Hells Gate
Hells Gate was named by the convicts who came to Macquarie Harbour. It neatly captures the dangers of the narrow entrance as well as the idea that this was beyond civilisation. It was the entrance to one of the most isolated places on earth.

Cape Sorell Lighthouse
With the development of the silver and zinc mining fields at Zeehan in the 1890s, Strahan and Macquarie Harbour became a major west coast port. A lighthouse was constructed on Cape Sorell in 1899. It stands 40 metres high and the tower is 2.5 metres in diameter. It is now the only structure still standing as the houses and the engine room have been dismantled. It stands where there was some form of signal station from earliest times.

Sarah Island
In January 1822 a ship arrived in Macquarie Harbour with 14 convicts, 16 soldiers and their families. They established a convict station on Sarah Island. This was an act of craziness as the island had neither a regular water supply (water had to be shipped 6 km from Phillips Island each day) nor good soil. Nearby Grummet Island was used to separate the female convicts from the male convicts. The convicts lived in cold and harsh conditions. As early as 1826 the governor was realising that Sarah Island was unsatisfactory. By 1834 the settlement had been abandoned and a new penal settlement had been established at Port Arthur. Today only the remnants of the buildings are left but it is possible (and there are some very informative maps available) to see exactly where the original buildings were.

The Gordon River
'This vanishing world is beautiful beyond our dreams and contains in itself rewards and gratifications never found in an artificial landscape or man-made objects' wrote the great photographer, Olegas Truchanas, who died in the Gordon River in 1972. It is an accurate and passionate description. To see the Gordon River, and to walk through the dense temperate rainforest on its banks, is to experience one of the wonders of the world. It is so isolated, so dark and gloomy, so totally removed from the rest of the world.

Yet, in the late 1970s the Tasmanian Liberal government did everything in its power to destroy the area and to dam the Franklin River. The plan was to build a 105 metre high dam on the Gordon River 40 km from Macquarie Harbour. The battle to save the river took place at Warners Landing, 6 km from the junction of the Franklin and Gordon Rivers. So passionate were the protesters, and so aggressive were the police, that in the summer of 1982-83 a total of 1272 people were arrested. It was the action of the Hawke Federal Labor government and a decision from the High Court in Canberra in 1983 which saved the river. The publicity lead to a huge increase in tourism resulting in 90, 000 tourists a year by the early 1990s. As a result of this the boat from Strahan became larger and faster causing the Tasmanian Government to restrict the speed up the river to 9 knots.

Today it one of the triumphs of the environmental movement and it is easy to see and understand why they fought so passionately. It is a unique piece of Australia. It was first explored by Captain James Kelly in 1816 and named after James Gordon who had given him the whale boat which he used to explore the river.

A lovely location with stunning walks and close to many fine beaches.